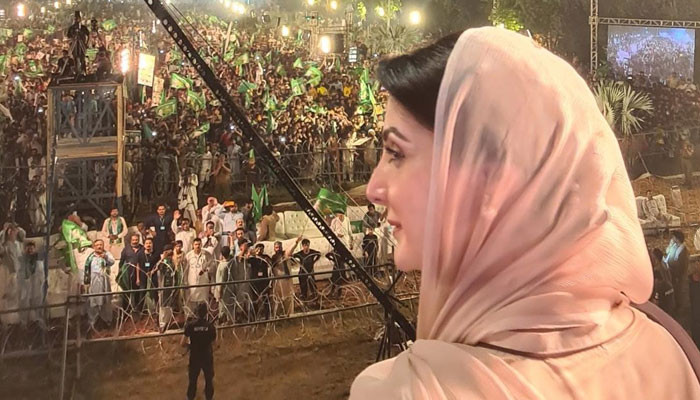 SHEIKHUPURA: PML-N Vice President Maryam Nawaz claimed on Friday that Prime Minister Shehbaz Sharif would announce a “relief package” for the people of Pakistan soon as oil prices have come down in the international market.

Maryam, while addressing a public gathering in Sheikhupura, said that people will follow Nawaz Sharif even if he’s in jail or London.

The PML-N leader asked the masses why the PTI Chairman Imran Khan appears on TV daily, only to abuse people, but did not offer any help to those in need when he was in power.

“Imran Khan, in his 1.5-hour speech, coudn’t talk about [PTI’s] performance in Punjab even for 1.5 minutes. Punjab is still standing with the lion today,” said Maryam.

She also claimed that people were aware of was responsible for the ongoing inflation, adding that PML-N would take the country out of the difficulty no matter how tough the situation was.

“Fitna Khan, why should Punjab vote for you? Punjab was made poorer while Pinki peerni, her children, and Farah Gogi became millionaires,” said the PML-N leader.

Maryam said that Khan calls people names during his speeches but does not disclose his performance. She added that Punjab Chief Minister Hamza Shehbaz had announced free electricity for the people of Punjab but the PTI chose to go to court over it.

“Thankfully, oil prices have come down in the international market, so PM Shahbaz will soon announce a great relief for the people in the next few days,” said the PML-N leader.

Talking about the allegations hurled against NAB chairman Justice (retd) Javed Iqbal, Maryam said that the woman had gone to Imran Khan for justice but instead the former prime minister kept the video in his custody in the Prime Minister’s House.

The PML-N leader claimed that the NAB chairman’s video was used to quash cases against PTI leaders. “Was fitna Khan in power for the service of the people or for blackmailing?” she asked.