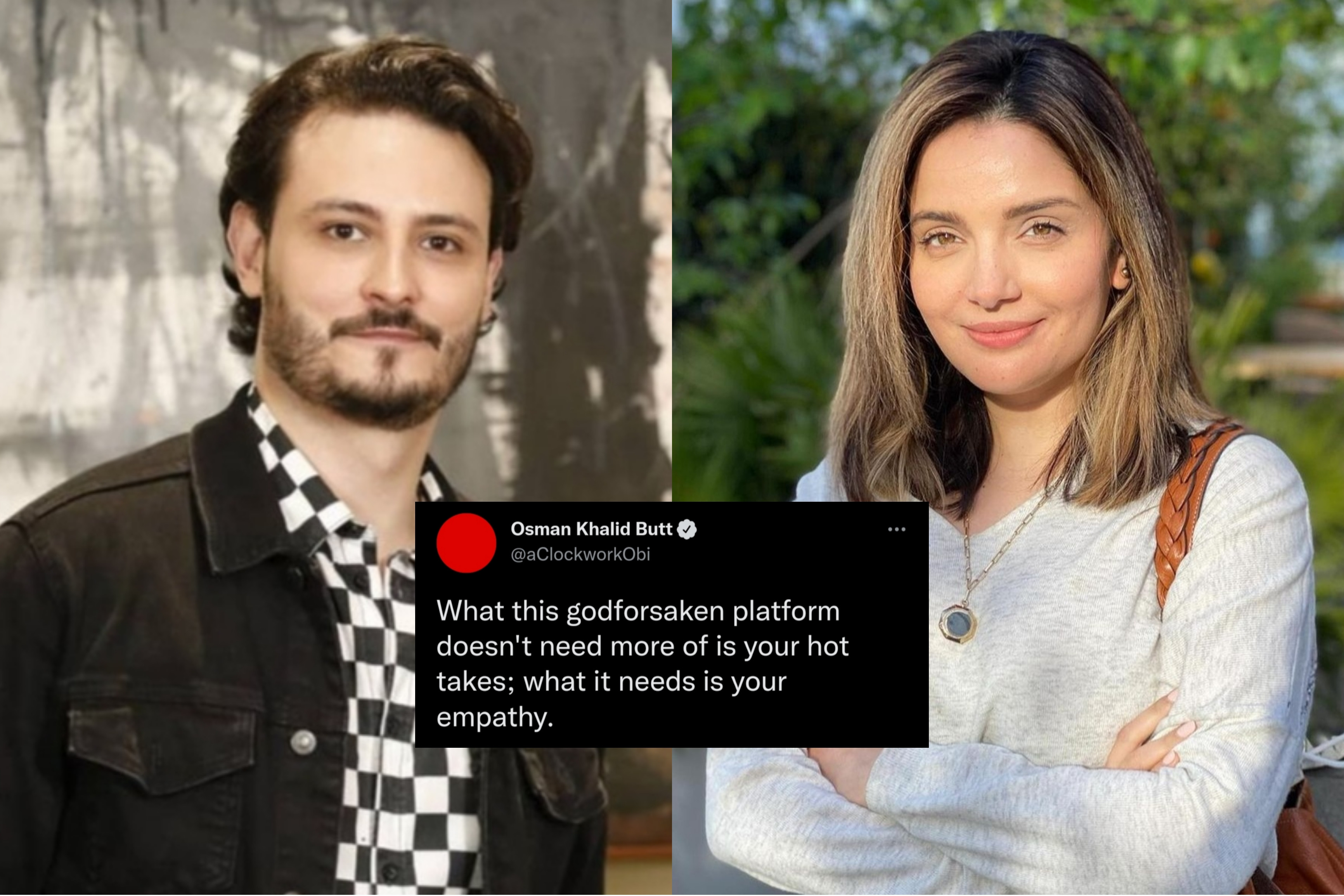 Several members of the showbiz industry, including Armeena Khan and Osman Khalid Butt, weighed in on the recent recovery of 13-year-old Dua Zehra, who had allegedly been kidnapped from Karachi’s Alfalah locality last week. In a video available with The Express Tribune, Dua claimed that she had married of her own free will in a court.

Commenting on the same, actor Armeena Khan shared on Instagram, “Dua is a child (a minor) and she belongs to her parents until she is 18.” She added, “Under Pakistani law, if she has been subjected to child marriage, then it is still rape and abduction. A court marriage or a nikah cannot take place under false pretence.” Asking netizens to keep their opinions to themselves owing to the sensitivity of the case, Armeena wrote, “Till the case is concluded, can all the armchair experts give it a rest?”

Osman urged people to proceed with caution while sharing their opinions online, writing, “Kindly reserve your judgments and do not share any unverified statements till the entire matter comes to light. We’ve all seen, just in recent days, how unconfirmed (and wholly incorrect) news becomes the ‘truth’ just on the basis of how frequently it’s shared. Stop this.”

Kindly reserve your judgments and do not share any unverified statements till the entire matter comes to light.
We’ve all seen, just in recent days, how unconfirmed (and wholly incorrect) news becomes the ‘truth’ just on the basis on how frequently it’s shared.
Stop this.

He added in a separate tweet, “What this godforsaken platform doesn’t need more of is your hot takes; what it needs is your empathy.”

What this godforsaken platform doesn’t need more of is your hot takes; what it needs is your empathy.

On the flip side, Mathira aired out her grievances online, sharing on her Instagram story, “It’s so sad. Why would you do that to your parents,” adding, “[Because] of stupid girls like this real cases of missing girls are not taken seriously.” 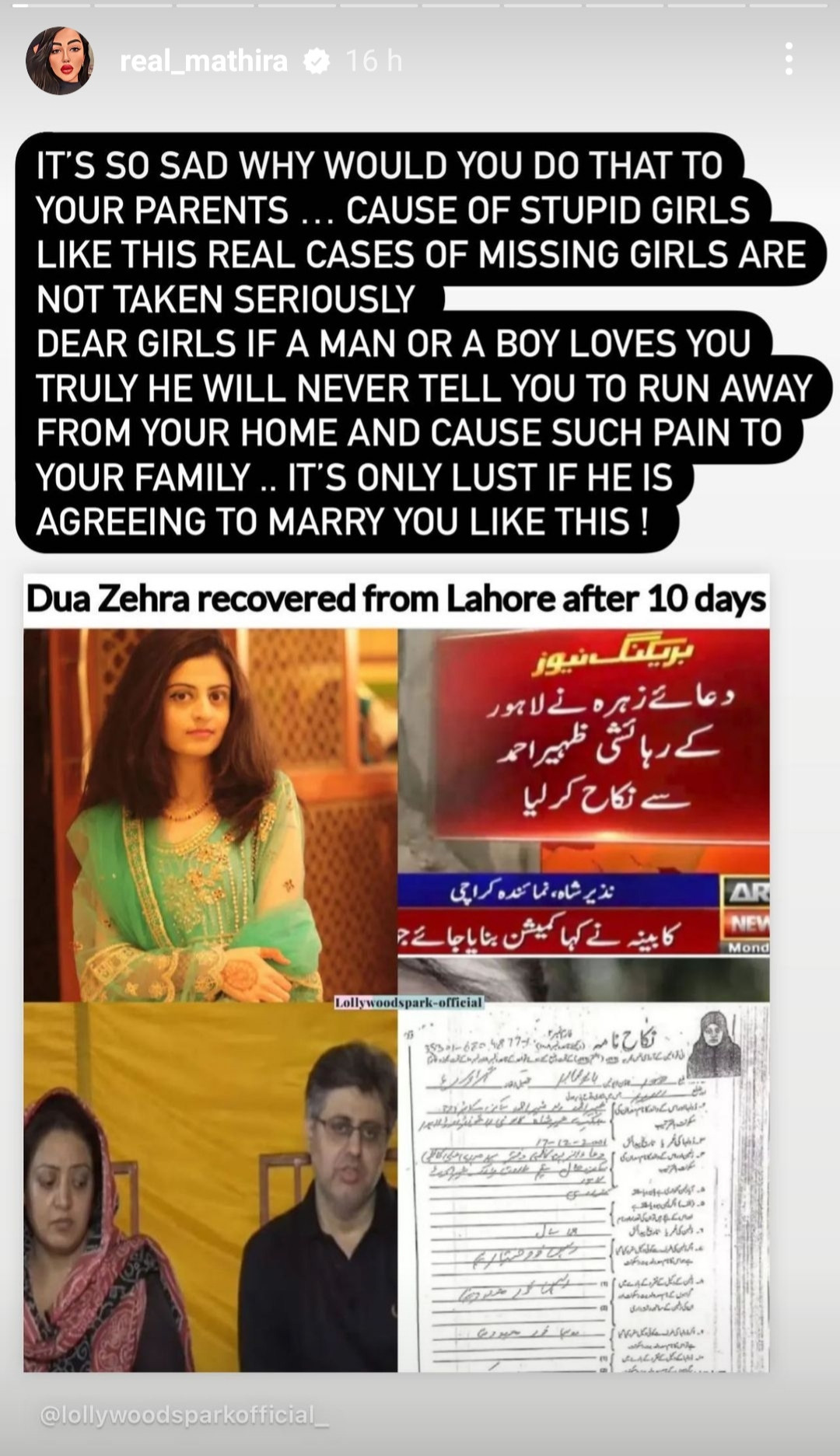 VJ and host Anoushey Ashraf reposted a tweet to her Instagram story which called out individuals attempting to morally police a child. The tweet read, “If a crime is what you need to renew your sympathy, it will still have been committed. Dua Zehra is reportedly fourteen. A fourteen-year-old child bride is a victim, not a conspirator. Shelf the indignation.” 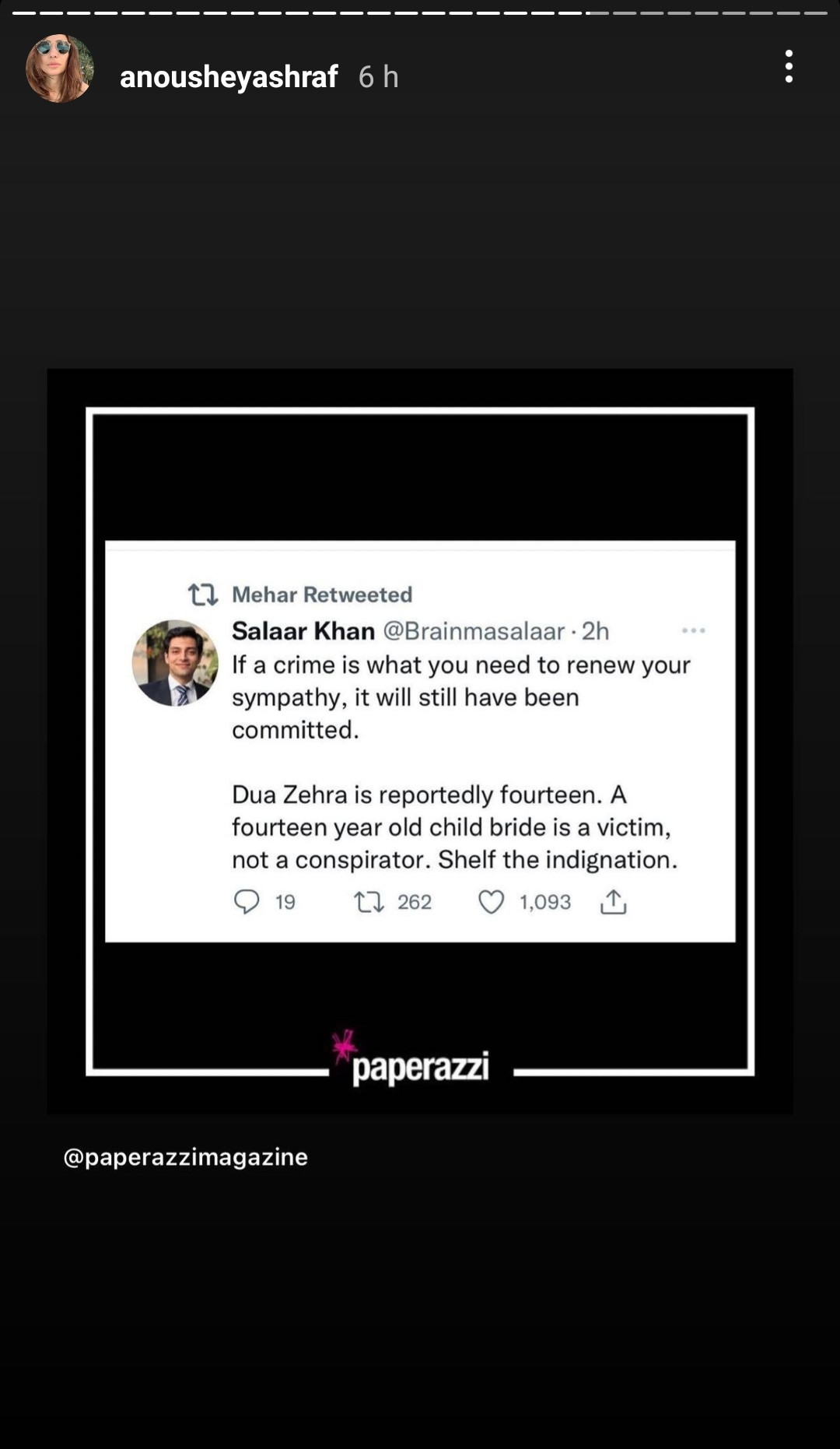 The police confirmed that the teenager and her reported husband Zaheer Ahmed are currently at the District Police Office (DPO) in Okara. According to reports, Dua is being shifted to Lahore and the Karachi police have been informed about the development.

In the video, the teenager further stated that she left Karachi at her will and was not kidnapped, adding that she wishes to live with her husband and does not want to return to her family.

Commenting on the marriage certificate, the father said his daughter could not be 18 years of age and further added that he did not know anyone named Zaheer, the purported husband of Dua as per the nikahnama.

According to the nikahnama, Dua was purportedly born in 2001 and was aged 18 years at the time of the nikah. However, PPP leader Shehla Raza, who visited Dua’s parents, said the girl was 13-year-old as per her B-Form (Child Registration Certificate issued by NADRA). 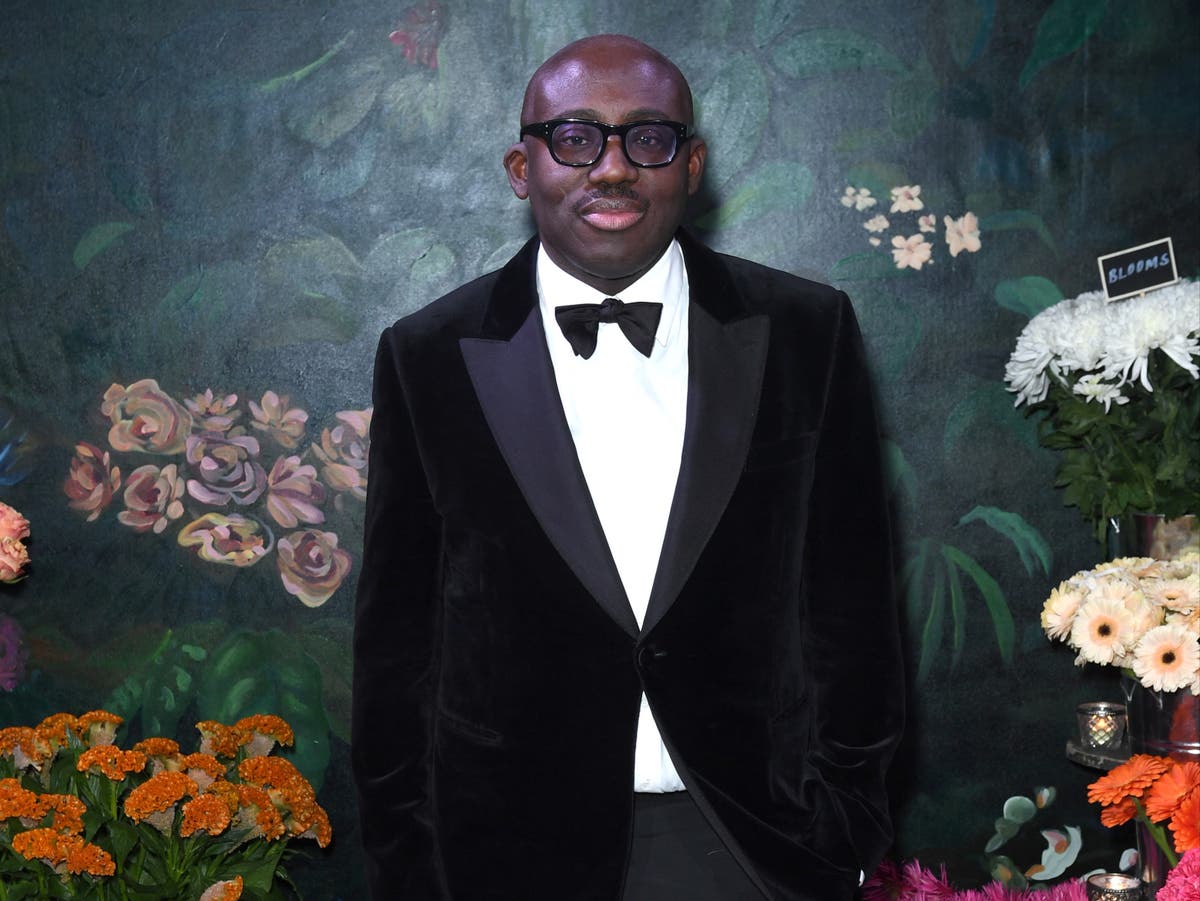