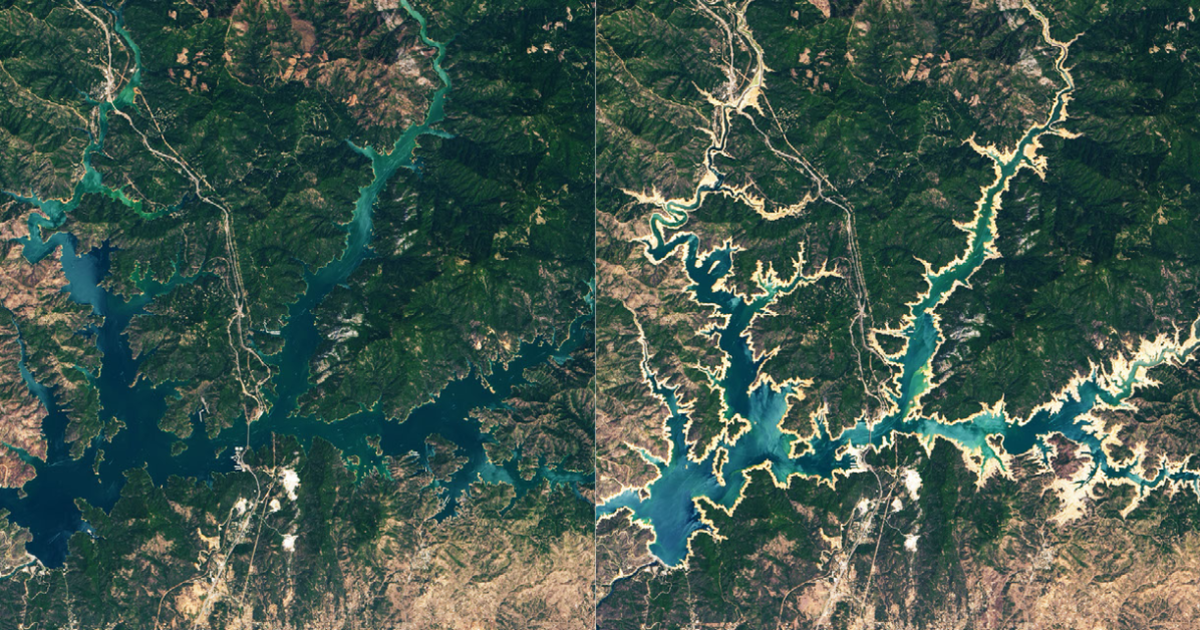 New images taken by NASA satellites highlight the devastating effects of the persistent drought plaguing California, as the state faces dry conditions not seen since the late 1970s.

Several images, taken by the Moderate Resolution Imaging Spectroradiometer on the space agency’s Terra satellite, show the progression of melting snow in the Sierra Nevada, a key source of water. After a below-average snowfall season, the snow melted away completely nearly a month ahead of schedule.

The unusual melt has left reservoirs without their usual inflow of freshwater needed to sustain the state during the dry months of summer and autumn.

In any given year, Sierra Nevada snow makes up about 30% of California’s water supply. This year, about 685,000 acre-feet of expected water runoff never reached the intended reservoirs — a loss of about 40% more water than L.A. uses in a year — instead soaked up by parched soil along its journey.

The three images show the mountain range on March 31, the seasonal peak, May 18 and July 7, the most recent cloud-free day. The snow has completely melted in the third image.

Another series of images, taken by the Operational Land Imager on the Landsat 8 satellite, show Shasta Lake and Lake Oroville, comparing June 2019 to June 2021. Over two years, the water level of the state’s two largest reservoirs decreased dramatically.

Looking at the 2021 images, the tan areas represent parts of the lakebed that are typically underwater when the reservoirs are filled closer to capacity. NASA refers to the phenomenon as “bathtub ring.”

Shasta Lake, California’s largest reservoir and third-largest water body overall, represents a crucial water source for agricultural lands in the middle of the state. As of last month, the lake held 1.87 million acre-feet of water — about 41% of its capacity, and 49% of the historical average for the season.

In the two years since the first image of the lake was taken, the water level fell 106 feet in elevation.

Lake Oroville has suffered a similar fate, with its water level falling 190 feet since June 2019. The record low for the lake is 645 feet, set in September 1977, according to CBS Sacramento.

John Yarbrough, deputy director of the California Department of Water Resources State Water Project, said that record could be broken this summer.

“We think it will get around that ballpark. We’re looking at 640, we don’t know exactly,” Yarbrough said.

In June, Cal Water reported that the lake was at 35% of capacity, and 43% of average.

According to NASA, the state has conserved enough water to mitigate immediate concern about water shortages in the state, but another snow drought this winter could pose serious issues in years to come.

Multiple areas throughout California are under excessive heat warnings issued by the National Weather Service, and according to the National Integrated Drought Information System, approximately 85.4% of the state is experiencing extreme drought.

Sophie Lewis is a social media producer and trending writer for CBS News, focusing on space and climate change.

Undersea volcano eruption in Tonga was a “once-in-a-lifetime event” that could warm Earth’s surface, scientists say