It was a far more subdued performance from Kyrgios on Centre Court compared to his fiery match against Stefanos Tsitsipas on Saturday, and the Australian admitted he was far from his best as he triumphed 4-6 6-4 7-6 (7-2) 3-6 6-2.

Only when he put away a forehand volley on his first match point in the fifth set did Kyrgios show real signs of emotion — looking to the crowd and roaring in delight.

The victory was hard-fought, too, as the 27-year-old appeared to be struggling with a shoulder problem throughout the match and needed treatment from the physio at 3-2 in the third set.

“I need a glass of wine for sure tonight,” he admitted in his on-court interview after the match.

Next up for Kyrgios is Chile’s Cristian Garin, who became the first man at this year’s tournament to come back from two sets down as he defeated Australian Alex de Minaur.

Kyrgios has now reached his first grand slam quarterfinal in seven years and remains unbeaten in all of his five-set encounters at Wimbledon.

“Today, I was almost just smiling and laughing to myself on the far side, knowing that I was locked in an absolute battle,” he told reporters. “In the past I wasn’t able to enjoy that … I was almost enjoying the competitiveness (today).”

American Nakashima, playing in his first fourth-round match at a grand slam, claimed the first set with the first break point of the match, but Kyrgios, despite clutching his shoulder a number of times, hit back with a break at the start of the second.

The serve proved to be Kyrgios’ best weapon, with one ace clocking 137 miles per hour as he saw out the set and leveled the match.

There were few opportunities for either player to break in the third set, but Kyrgios gained the upper hand in the tie break, slapping a cross-court forehand beyond Nakashima’s reach to move ahead in the match.

The 20-year-old, however, was far from done and broke for a 4-3 lead in the fourth. What followed was a strange passage of play in which Kyrgios appeared to tank the remainder of the set with slow serves and lackluster ground shots.

“Complete rope-a-dope tactic,” he later explained. “I just threw away that service game. I knew that he was in a rhythm, he was starting to get on top of me and I just wanted to throw him off a little bit.”

That meant the match went to a decider, only for Kyrgios to produce some of his best tennis while Nakashima faded.

A double break of serve laid the foundations for the victory, and Kyrgios ended the match with 35 aces — taking his tally for the tournament to 103 — and 79 winners

He will now contest his second Wimbledon quarterfinal and first since 2014; back then, he famously defeated Rafael Nadal in the fourth round as a 19-year-old debutant.

His performance on Monday may not have carried the same infectious, pulsating energy as his victory against Nadal, but it was a gutsy victory nonetheless.

“It wasn’t anywhere near my best performance level-wise, but I’m super happy to get through,” said Kyrgios. “I fought really hard today.”

Controversy has tended to follow Kyrgios throughout his tennis career and this year’s Wimbledon has been no exception.

He was fined $4,000 for a verbal obscenity in his match against Tsitsipas, adding to the $10,000 he was fined for unsportsmanlike conduct after spitting towards a fan he said was disrespecting him during his first-round match against Paul Jubb.

But Kyrgios has acknowledged that he is a different player and person to the one who faced Nadal eight years ago, as evidenced by the calm exterior he displayed on Monday.

Earlier this year, he revealed the battles with mental health issues he has dealt with during his career, recounting his struggles with drug and alcohol abuse, as well as self-harm.

On Monday, he could briefly reflect on what he described as his “roller coaster” journey.

“Look, there was a time where I was having to be forced out of a pub at 4am to play Nadal in the second round,” Kyrgios said.

“My agent had to come and get me out of the pub at 4am before I played my match on Centre Court at Wimbledon.

“I’ve come a long way, that’s for sure. I think it’s daily habits and the people around me … I feel like I can reflect on all those dark times and I’ve pushed them all away. Now, to sit here quarterfinals of Wimbledon, feeling good, feeling composed, feeling mature and having that around me, I’m extremely blessed and I feel like I’m comfortable in my own skin.”

Against Garin, a player three spots below him in the world rankings but with less experience of the sport’s biggest stages, Kyrgios could step into the final four of a grand slam for the first time.

That would be a significant moment for a player accustomed to riding the highs and lows of a professional tennis career. 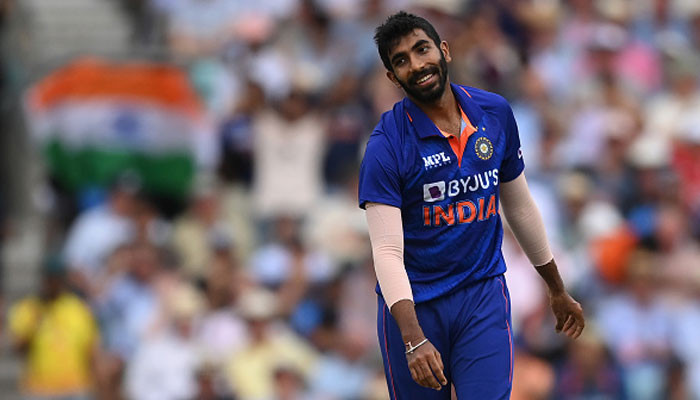