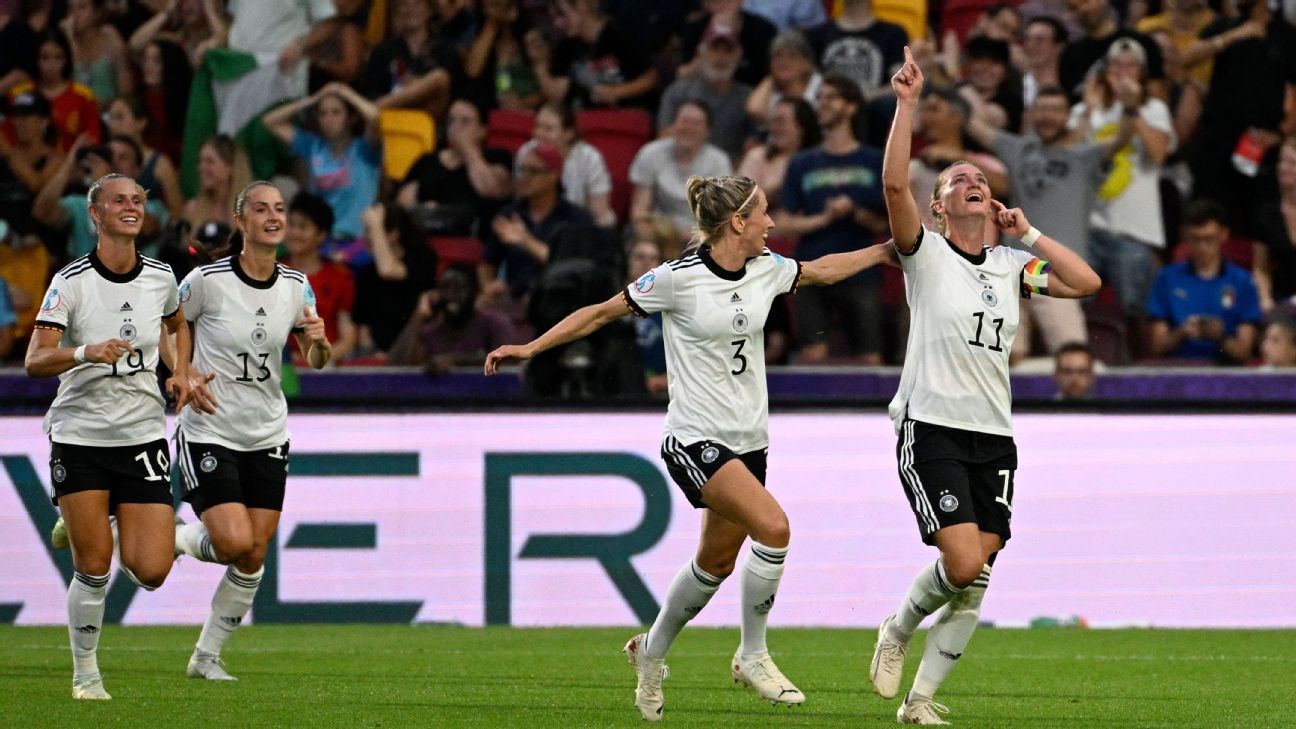 BRENTFORD, England — For the third time in their past five matches, Spain conceded within the first three minutes, leaving them with no route back into their group game against Germany, a 2-0 loss on Tuesday. While Germany emphatically punched their spot into the quarterfinals, Spain’s future at the 2022 Euro hangs on the result of their upcoming final group stage match against Denmark.

For all the excitement of the Euros so far, the biggest unpredictability has been how predictable the outcomes have been. For the first time in a long time, all the Euros “favourites” have shown up with some of their best football, leaving the second-, third- and fourth-ranked teams in each group looking helpless to stop them. And each time one nation has put out a statement performance, there has been another the next day to change the narrative of which of the favourites would be left holding the trophy at the end of the month.

From Germany taking Denmark apart with ease, to France saying “hold my biere” two days later against Italy, to England reminding everyone that it’s coming home this summer in their ruthless dispatching of Norway on Monday — 12 matches into the tournament, we have yet to have an upset outcome after 90 minutes. But it also means that Germany vs. Spain lived up to the billed hype, as it was played as you’d expect a Germany vs. Spain match to be played.

Where Spain looked to get the ball on the ground and move it around as their players milled around the pitch, fluidly switching through positions as the play dictated, Germany came forward with devastating accuracy. Playing out from the back was enough to undo a Spanish team who, whilst technically gifted, had routinely struggled to make their ability count.

Caught out in the first minute and conceding in their first game against Finland, Spain could only make it until the third minute before going a goal down to Germany. When an unfathomable short pass from Sandra Paños was seized on by Klara Bühl, there was only ever going to be one outcome with the young attacker sending her shot low beyond the goalkeeper. Bühl became the 36th different player to score for Germany in Euros history — the most for any country in Euros history, and better than the next nation down, Sweden, with 28 different goal scorers.

“We all thought we were going to learn from the incident against Finland the other day, but we made a mistake today in the third minute,” said Spain manager Jorge Vilda. “Now we hope that we won’t make those mistakes going forward. We have to be mentally ready to know how to start the game. I don’t expect the players to play perfectly from the beginning but I want them to compete well.”

With the early advantage, Germany were more comfortable to sit back and let Spain have the ball as they wanted, the firm (but fair) tackles from the eight-time European champions a staple of the game.

Without Alexia Putellas and Jenni Hermoso, Spain had lost a lot of their goal threat but, as ever with the team, there was a clear lack of understanding of who needed to be the one to make the difference in the box. Usually deployed deeper in midfield, Patri Guijarro was given the freedom to push up into the box, but the German defence stood resolute.

Maybe that was the biggest surprise on the night, that Spain hadn’t been able to overcome their shortcomings as other “favourited” nations had, instead suffering the same issues that have plagued them at every major tournament. Not quite as farcical as when La Roja lost to England in the 2017 tournament after they’d had 74% possession, but still troubling for the team who’d had 66% of the ball against Germany and been unable to penetrate the steadfast German defence.

“They made the most of their few chances — we didn’t let them have many,” Vilda said. “We created more ourselves and had more possession. We didn’t have luck on our side in front of goal. We need to remain calm as a team. They did what I asked them and if we keep doing that we will get the goals.”

Already having scored once in the Euro, Alex Popp made it two-in-two with a first-half header all but ending Spain’s chances of taking anything from the game or finishing top of Group B with 55 minutes of the match still left.

Having lost only one match in Euro history after leading at the break (when they were knocked out of the last tournament in the quarters by Denmark), Die Mannschaft put in an exemplary second-half performance, not allowing the dynamic Spanish side too many shots at Merle Frohms‘ goal.

The defensive resilience of the German team became clear when defender Marina Hegering was named as the player of the match, the back line having worked tirelessly and harmoniously all night. After their attacking team performance that had left Denmark chasing shadows with their best player, Pernille Harder, marked out of the game in their first match, Germany again controlled proceedings in Brentford, but this time without the ball.

The value of team spirit was on show all night for Germany as no matter which changes Germany coach Martina Voss-Tecklenburg made, the team continued to play in the same way. Conversely, when Spain boss, Vilda, went to his bench and found some of the best attacking talent playing in Spain, the team on the pitch didn’t improve in a meaningful way. The plans appeared limited for the Spanish coach, whose approach of just asking the team to possess the ball and move it forward was, once again, all too predictably the downfall for the team.

“It was good we scored the second before the break. Then we adapted to a 4-5-1 and the team did really well then,” Voss-Tecklenburg said. “We were willing to suffer today — we knew we wouldn’t have a lot of possession, but we wanted to use the switches to the attack. Tactically everything worked out today.”

Now Spain have the onerous task of beating Denmark in their final group match, a clash they will be favourites for with the Danes continuing to look off-colour earlier on today against Finland.

Yet, for all the talk of Spain being the team with their name on their trophy this summer, they would have to emulate the Germany team of 2013 that through sheer grit and determination crawled out of their group, having finished second, to reach the final and lift the trophy. That 2013 German team is the only one in Euro history to finish second in its group and still win the tournament. So, no pressure on La Roja.

For Germany, one of Austria or Norway awaits in the quarterfinals, while the final group match against Finland will be a chance for Voss-Tecklenburg to rotate her team. The coach will be forced to shuffle the deck regardless with both Felicitas Rauch and Lena Oberdorf suspended, but it might end up devolving into a training match for the European powerhouse.

“Confidence is developed — you can’t train that,” said Hegering, the player of the match. “Every day you have to be conscious about it and work very hard and I think, in the last two training camps, we had a great base for that.”