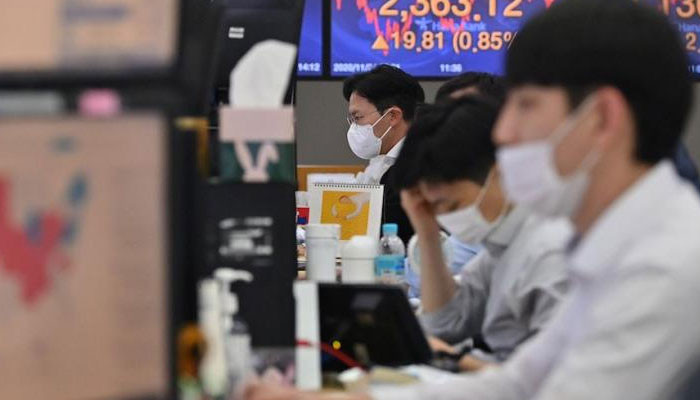 HONG KONG: Asian markets enjoyed some much-needed gains Thursday having so far suffered a troubled week, with sentiment lifted by a bargain-buying, a positive lead from New York and Europe, and further pledges of economic support for China’s economy.

However, traders remain on high alert on a range of crises from the Ukraine war, surging inflation, central bank monetary tightening and Chinese COVID lockdowns.

The ongoing earnings season has seen a mixed bag of results that have weighed on tech firms, though there was some cheer from a forecast-beating reading by Facebook parent Meta on Wednesday, which analysts said could provide some relief to the sector. Apple and Amazon are due later this week.

It cited Premier Li Keqiang as saying Wednesday that stabilising the jobs market was a “key support” to keeping economic growth within a proper range.

The comments come as unemployment has jumped in recent months owing to lockdowns in key cities including Shanghai, which have been put in place to battle an outbreak of COVID but have hammered the economy and threaten global growth.

Beijing’s top brass have made several announcements in recent weeks to lift sentiment. Xi Jinping on Tuesday called for an “all-out” campaign to build infrastructure, while the People’s Bank of China has cut the amount of cash banks must hold in reserve in order to free up money to lend.

And Vice Premier Liu He pledged to provide stability to the stock market and support overseas share listings.

But investors remain sceptical as officials have so far provided very little of anything concrete on the policy front, with analysts saying the key obstacle for equities is the leadership’s refusal to budge from its drive to eradicate COVID.

Hong Kong and Shanghai were up in early trade, while there were also gains in Tokyo, Sydney, Seoul, Singapore, Wellington, Taipei, Manila and Jakarta.

However, “risk assets in general still need to navigate the consequences from what looks to be an increasingly more aggressive policy tightening by many central banks,” National Australia Bank’s Rodrigo Catril said.

“China’s zero-COVID policy remains in place and the prospect of a protracted Russia-Ukraine conflict does not bode well for the energy prices and energy supply for Europe in particular.”

And Kate Moore, at BlackRock, told Bloomberg TV: “The uncertainty factor is some of the highest we’ve seen in the course of the last number of years.

“There are so many crosscurrents. And against that backdrop, it’s hard to see volatility come down dramatically.”

Markets are gearing up for next week’s major event, the Federal Reserve’s latest policy meeting, where it is expected to lift interest rates half a point and signal further big increases through the year as it battles to rein in runaway inflation.

The prospect of borrowing costs being ratcheted up has sent the dollar soaring against its peers, sitting around a 20-year high against the yen as Japan maintains an ultra-loose monetary policy.

The greenback is also at a five-year high on the euro as the European Central Bank also refuses to follow the hawkish Fed, while the single currency is also being weighed by fears over the economy as Russia cuts off energy supplies to parts of the continent.