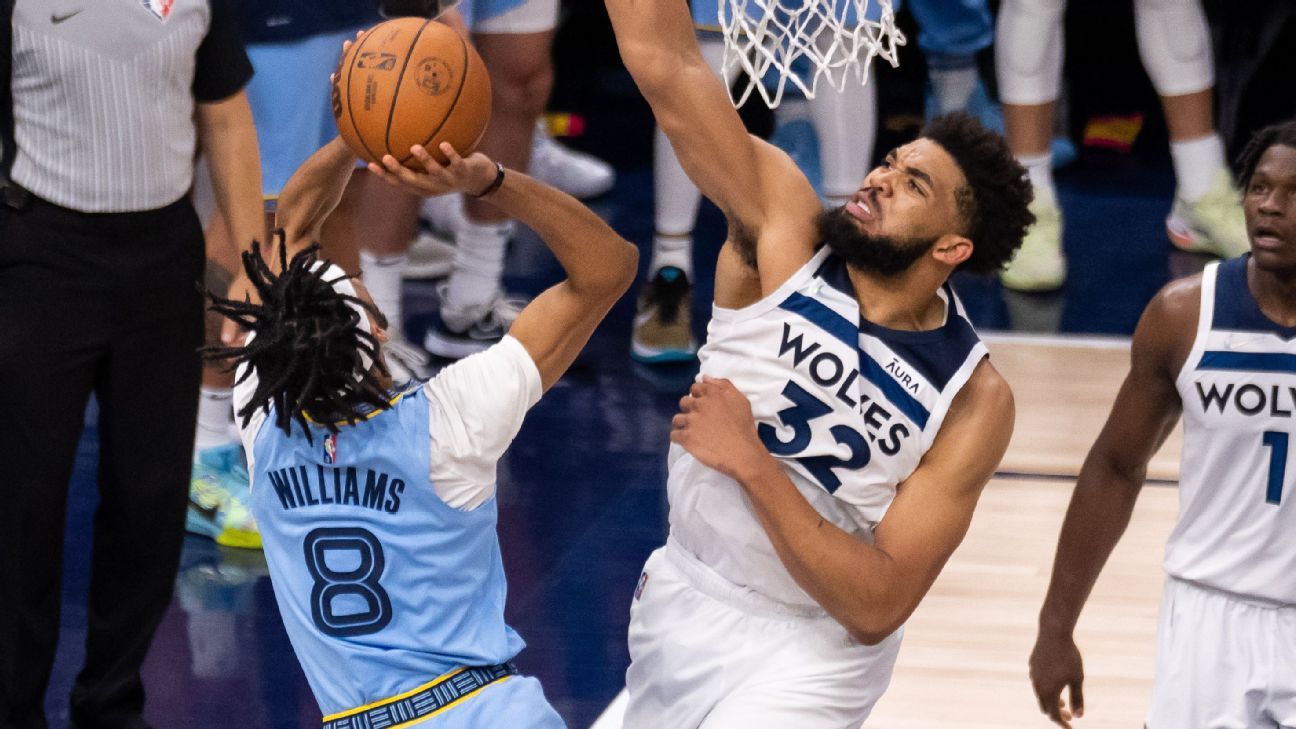 MINNEAPOLIS — Coming off a lackluster outing in the Minnesota Timberwolves‘ Game 3 loss, Karl-Anthony Towns responded with a prolific performance in Minnesota’s 119-118 win over the Memphis Grizzlies in Game 4 on Saturday night. The best-of-seven series is now deadlocked at 2-2.

Towns, a three-time All-Star and the No. 1 pick in the 2015 NBA draft, struggled in the previous two games, both Minnesota losses. In Games 2 and 3, he racked up 10 personal fouls but made only seven field goals, as the Grizzlies threw multiple defenders at him in the half court.

“A bunch of rage,” Towns said of his mood coming into Game 4. “Trying to find ways to dominate regardless of what they throw [at me] — double, triple, quadruple, coach comes on the court and guards me, as well — and find ways to put the ball in the bucket.”

Towns answered with 33 points and 14 rebounds, joining Kevin Garnett as the only Timberwolves players to record a 30-and-10 playoff game. One of the NBA’s most versatile offensive big men, Towns showed off his full repertoire. He thrived in the pick-and-roll, drove as an isolation scorer against Memphis’ overmatched big defenders and even came off screens as a long-distance shooter. He scored an efficient 1.43 points per possession.

“He was angry,” Minnesota coach Chris Finch said of Towns’ attitude before the contest. “He was really good from the beginning: aggressive, putting pressure on them, forcing them to blow the whistle, get to the free throw line, things that he hadn’t been doing a lot in the last couple of games.”

Towns made a living at the free throw line on Saturday, challenging the Grizzlies’ defense en route to the basket. He sank 14 of his 17 free throw attempts and attributed much of his overall success in Game 4 to his output at the stripe.

“It gives me free shots at the rim,” Towns said. “It gives a good touch of the basketball. It gives me a good rhythm. More importantly for me, personally, it allows me to calm down.”

Among those free throws were the pair that iced the game for the Timberwolves, putting them up four with 4.4 seconds remaining. Towns, a career 83.3% free throw shooter, said he was infinitely confident he’d drain the final shot.

“I knew it was good — the game was over,” he said. “I was thinking about what I was going to eat.”

Morant, who labored for only 11 points on 4-for-13 shooting from the field — accompanied by 16 assists — will have an opportunity to answer for himself in Game 5 at Memphis on Tuesday night.