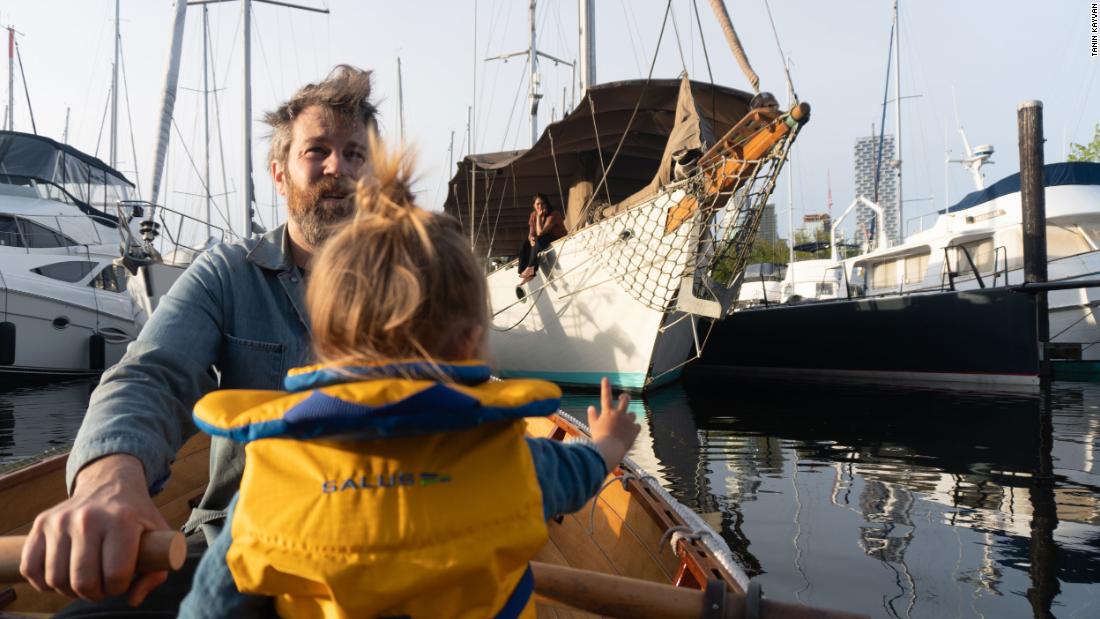 Kristyn Christiansen paddles a row boat with his son, Boden, at a marina in Vancouver, British Columbia. Boden is waving at his mother, Sophena Kwon.

Nestled inside a marina in Vancouver, British Columbia, among the charter boats and commercial vessels, a couple is raising their two young children.

For nearly a decade, this 60-foot-long sailboat has been home for Kristyn Christiansen and Sophena Kwon. And they love it.

“It’s our place in the city,” Christiansen said.

Inside, the boat is about the size of a small apartment. There isn’t a ton of space, but they make the most of what they have.

“They live such a creative lifestyle,” said photographer Tanin Kayvan, a Vancouver native who has been documenting the family’s life on the boat and on a nearby island where they’re building their next home. “There’s really a lot of thought and intention that went behind everything that they’ve created for themselves.”

Vancouver’s housing market was recently ranked as the most expensive in North America, and living on a boat has allowed Christiansen and Kwon to save quite a bit of money. But this couple’s lifestyle is not about necessity. It’s always been a choice.

“They’re actually two very successful business owners,” Kayvan said. “Kristyn, he’s an artist and he builds signs for different businesses around the city. And then Sophena (helps run) a family business where they sell clothing made from natural fibers and natural dyes. They do very well off of that.”

Christiansen, who grew up in Saskatchewan and lived in the Canadian prairies until he was about 30, had always dreamed of living on a boat. It was one of the reasons he moved to Vancouver.

He got his first boat by trading in a motorcycle he had restored. He later traded that in for a larger vessel, and then in the early 2010s — right around the time he met his future wife — he sold that boat and got the one they live in now.

“With a boat like this, I can take it anywhere in the world and have my home anywhere that I wanted to,” he said. “It’s just nice to have that option to move it around.”

Kwon was born in Vancouver, sailed as a child and has always lived around water. It didn’t take her long to adapt to life in the harbor.

“This boat is a pretty special boat,” she said. “I had a really nice apartment in the West End of Vancouver, and the boat topped that for sure. It immediately felt like home.”

Boden hangs onto a shelf inside the boat. “The good thing about living on a boat, especially for children, is that everything has rounded edges so that if you’re falling about at sea, you don’t hurt yourself,” photographer Tanin Kayvan said. “And there’s a lot for (children) to hold on to, because that’s how boats are built.”

Christiansen stands on a rocky area in Bowen Island, a short ferry ride from Vancouver where the family has a property that they use for weekend getaways. Bowen Island is also where they are planning to build another home in the next couple of years.

Early on in their relationship, Christiansen and Kwon would spend time working on the boat.

“I’m quite a hands-on person as well and I love working with my hands, and it was a nice process to do together,” she said. Afterward, they’d go diving and swimming. “There’s so much to explore close to Vancouver,” she said. “We regularly go to Hornby Island and Salt Spring Island and kind of island hop along the way. It’s such a great part of the world to sail in.”

She moved in, and the two married. They now have two young children. Their son, Boden, is nearly 3 years old. Their daughter, Calico, just turned 1.

Kwon delivered both of her kids on the boat, with the assistance of midwives.

There are other families in Vancouver who also live on boats, but Kwon and Christiansen say they’re the only one in their marina. For a monthly fee, the marina provides them with electricity and access to fresh water that they can use to fill up the tanks in their boat.

“In most marinas, the power’s included,” Christiansen said. “You pay the marina fee. It’s probably anywhere from CA$1,000 to $1,500 a month depending on where you are. But you can’t get an apartment in Vancouver for $1,500 that, to me, is anywhere near as nice as living on a boat in a harbor.”

Other costs of living on a boat include boat insurance, which Christiansen says goes for about $800-$1,000 a year, and fuel, which he says for a sailboat is relatively small. They also bought an antenna that allows them to connect to high-speed internet service.

Perhaps the most important thing about living on a boat is taking proper care of it.

“There’s a lot to know about maintaining your boat and getting to know your boat,” Christiansen said. “It’s no different than owning a house. You might have to redo your roof. Or you might have a leak or rot.”

The family lives a happy, comfortable life on the boat, but they have had to make a few adjustments over the years.

The boat’s electric heaters can only do so much on the coldest winter nights, so they have a wood stove on board. On those nights, Christiansen has to wake up every three or four hours during the night to keep the fire going.

And their hot water only lasts for so long.

“You can have exactly a seven-and-a-half-minute hot shower,” Kwon said with a laugh. “So I either wash and condition my hair, or I do other things. It’s one or the other. Not enough hot water there to do everything.”

But those are minor inconveniences to them.

“You just make do,” Kwon said. “It’s really not much of an adjustment. I feel like we haven’t given anything up for this.”

Right now, the family all sleeps together in the same big bed. Christiansen and Kwon say they are appreciating this phase of their life, but they know that as the kids get older they’ll need more space.

“Four years ago, we were kind of looking at property, like what would be the next step, what would it look like if we did want to have kids?” Kwon said. “I love the idea of living on a boat, but I was thinking: ‘Is a boat it? Or do we need to find a place maybe with a backyard? Where do the kids go to school?’ Certain questions were coming up.”

So they’re starting to build a new home this year on Bowen Island, a rural community that is about a 20-minute ferry ride from Vancouver. They already have an off-grid place on the island, a property they call Moonshine Kingdom, that they use for weekend getaways.

“The proximity (to Vancouver) is nice. On the other hand, it also feels removed from the city,” Christiansen said. “Apart from when you enter off the ferry and a little town, there’s like no street lights. No traffic lights. It’s a beautiful island.”

Christiansen removes debris as he prepares land for building on Bowen Island.

Christiansen reaches over to a dock from the row boat they use to paddle around the marina.

Moonshine Kingdom is right on the ocean, and it is boat access only. It got its name because of how bright the setting moon will shine off the water, filling the entire property with light. There is a glass yurt, a kitchen, a sun deck and even a hot tub.

It gets its water from an underground aquifer that flows close to the property, Kwon said. Power comes from the sun or a generator when needed. Like on the boat, the family uses a wood stove for heat. Fire also warms their hot tub.

It’s a special place that gives the family a chance to get away from it all.

“We love Bowen and always have,” Kwon said.

The family’s new home on Bowen Island is still two or three years away. Christiansen will do much of the building himself, hiring a few trade workers along the way.

“We’re not building a big house either,” he said. “It’s pretty much like a boat, it’s pretty compact. We’ll try to make it as thought-out as we can as we build it.”

The plan is to keep their boat after that, just so they always have a place to stay in the city. And they want to start sailing on it again; since the babies were born, the boat hasn’t been taken out to sea.

“I think it would be nice if municipalities made more of an effort to make it easier for people to live on boats,” Christiansen said. “Because it is a lighter footprint, I think, on the planet to live on a boat. You’re being a little bit more self-sustaining. You are using power, but generally boats are more compact and more efficient than say a land home would be. There’s a lot of benefits environmentally.